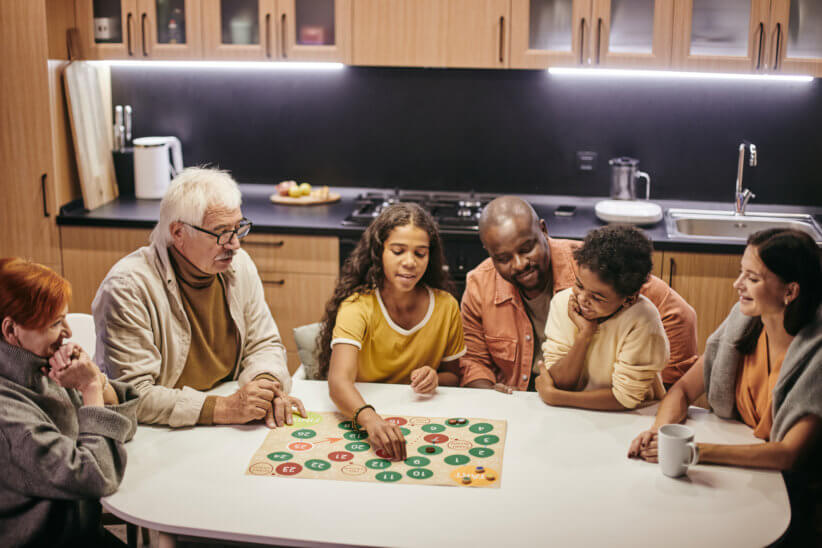 Move over, Monopoly! We’re adding some exciting new board games to our family game night rotation. Everyone loves a family game night, but we know things can get tricky when you have a wide range of ages playing together. We’ve rounded up some of the newest fan-favorite board games for children of all ages! There’s something for everyone, whether you want to test your trivia knowledge or go on adventures across the board. These games are educational, competitive, hilarious and just downright entertaining!

Psst… Check out 25 NYC *Free* Things Bucket List for Families to Do from Now until Winter!

This card game prompts players to practice motor skills like hopping and balancing, as well as giving hugs and high fives. Get ready for your kid to go bananas as they play and interact with this game!

Practice numbers, math and logic in this educational game! Similar to a deck of cards, there are six “suits” which represent numbers in different patterns. You will be prompted to find ways to represent the numbers, such as matching numerals with countable shapes. Take inspiration from this game and be inspired to make your own as your child continues to advance.

Based on a game you have probably played before, the board game version of “the floor is lava” lets your imagination run wild! Jump between foam pieces which correspond to the color your spinner lands in order to reach safety. Be sure to check that your foam pieces are not too slippery on the surface you use to play.

Take a trip to Walt Disney World for the night as you play the board game-version of this iconic Magic Kingdom attraction. Explore the ghost-infested mansion as you collect Ghost Cards to earn points and avoid Haunt Cards, which will make you lose points. Enjoy the fun design on the game board and cards as you play this spooky game.

Play as an infamous Disney villain with your own playing board and quest in this unique game! Complete your quest before the other players to win the game. The original game pack includes Captain Hook, Maleficent, Jafar, Ursula, Queen of Hearts and Prince John, but the game’s popularity has led to even more expansions: play as an assortment of villains from Disney, Pixar and Marvel films.

This game touts itself as “not your parents’ drawing game” which has been created by moms, dads and kids. You will have outrageous drawing prompts, several of which kids themselves dreamed up, as well extra features like drawing with your non-dominant hand and stealing points from other players. Update your drawing-based game night with this hilarious and competitive game.

Go head to head with kids, parents and grandparents in this fantastic trivia board game. Test how well you know pop culture references from Gen Z, Millennial, Gen X and Baby Boomer eras. You may just be surprised by how much you know.

Play with your partner against other teams to “make contact” with your secret agents. Guided by a card which re-arranges the board each round, you will use one-word clues to guide your partner to as many “agents” as possible while trying to avoid hinting at the other teams’ “agents.” With endless playing arrangements and “agent” names, you will have fun with this game for hours! Try switching up partners to figure out who has the best telepathic connections.

This silent roleplay game is unlike any you have ever seen! The story centers around Alice, a teen who goes missing in Northern California. Spend the first 45 minutes sending texts to create your characters and their relationships to Alice and each other. The next 90 minutes of the game reveals Alice’s fate by using characters’ text messages. Accompanied by a great soundtrack, this long-play game is the perfect way to change up your game night and solve a mystery.

Take a journey from sea to shining sea as you compete to build railroads between major US cities on the board! Earn points by building the longest route, completing a route between two cities on your Destination Cards and claiming a route between two adjacent cities. This new classic is easy to learn and “thoroughly chilled out” for many nights of family fun!

Self-described as “The World’s First Dodgeball Card Game,” this is a fantastic option that both kids and adults can enjoy. The object is to collect cards while simultaneously ducking and throwing the plush burritos included in the game package–just make sure not to play near any antiques!

Best for a Party

Everyone secretly writes an answer to a question like “What is the best way to cook an egg?” Win cow tokens if your answer is in the majority, but watch your score get trampled by the pink cow if your answer is singled out. Try to guess how everyone else will answer these outrageous questions and get ready to learn what your friends and family really think!

Play with Your College-Age Kids

Based on the game Celebrity, this is a great game to play with your friends or with your older children! You will be given topics to reveal to your teammates like “Ebola” or “The Heimlich Maneuver.” In the first round, you can say anything except the word itself to guide your teammates; in the second round, only one-word clues; in the third round, only charades are allowed! This challenging and funny game will be in rotation for years to come.

Perfect for after the kids have been put to bed, this game is a grown-up version of the classic drawing-based game “Telestrations.” Put your art skills to the test with weird, wacky, and sometimes unintelligible prompts, from “It’s Raining Men” to “organ donor”! This game does contain many adult prompts, so take caution before you let the kids sit in on this one.

Campbell is an intern at New York Family. She currently attends Princeton University, where she is pursuing a Bachelor of Arts in Classics with certificates in Theatre and Gender & Sexuality Studies. She enjoys dancing, yoga, finding new podcasts and being a member of Princeton Cheerleading.